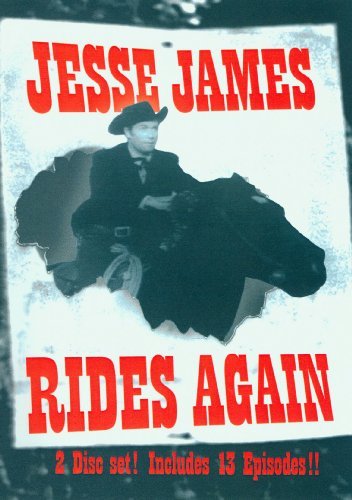 This entry involves the familiar "B" western plot of the villains trying to take over the local ranches because there's oil under the land. Meanwhile Jesse James (Clayton Moore) and his pal Steve Lane (John Compton) flee Missouri and wind up in the middle of the conflict assisting the ranchers. They take a particular interest in crippled rancher Tom London and his daughter (Linda Stirling) who are being raided by the Black Raiders led by Roy Barcroft. Tristram Coffin, a "respectable" town citizen is the brains behind the outfit.

The serial contains the usual cliffhangers and relies heavily on stock footage from the 1943 John Wayne film "War of the Wildcats" for the race to the refinery sequence. And yes, we see that famous shot of the exploding oil derrick in this one too. The stuntwork is top notch as usual. Two of the stunt men, Tom Steele and Dale Van Sickel in addition to doubling most of the actors in the action scenes, appear in four different bit roles each over the course of the film.

Clayton Moore, soon to become TV's Lone Ranger, plays Jesse not unlike the masked man. Linda Stirling in her final serial, has little to do except act helpless and look beautiful. Compton is simply awful as the hero's pal. Barcroft and Coffin make a formidable pair of villains. Holly Bane (aka Mike Ragan) and Charlie King are also part of the gang. "B" western veterans Edmund Cobb, LeRoy Mason (on the right side of the law for a change), Gene Roth and Edward Cassidy round out the cast. Keith Richards, who would play Jesse in the 1950 serial "The James Brothers of Missouri" has a bit as a phony drunk trying to find out what Jesse's next move is going to be.

This serial is as good as any turned out by Republic at that time and though predictable, is enjoyable nonetheless.